Before I bring up the issue, I want to point out that I have had fairly good luck working on the car for the past several months since I bought it. I have no practical experience with auto repair and maintenance beyond the most basic stuff, but I had a background with other work with my hands and thought this would be a fun project. With what has happened this year, I have had a lot of time to work on this. I wanted to describe my limited experience so that I can point out that making assumptions whether I did something is a bad idea, because I have no idea what I am doing beyond what I have seen in youtube videos, websites, and the service manual.

Some background on the current issue:

The car has been running pretty well. I finally found out that the fuel damper ruptured, which I why I have been losing so much fuel. Since I replaced it, the car has been able to start up instantly and the fuel consumption is less than a quarter of what it was. I decided to work on the cooling system next, since the car seems to burn off a lot of oil and in general runs hot. The dial on the dash reflects this as well. After draining the coolant, I put in distilled water and Thermocure, which did a great job at cleaning things out.

The dash still reported that the car runs a bit too hot (but much better, and going through another round of Thermocure), and the front radiator fan seems to stop working soon after starting up, so I decided to check on the fuel sender behind the distributor. I took care to remove it and reinsert it as it was, but I think i messed up when I put it back. The car cranks great, but it will not start and periodically backfires. I have been reading the manual, and it seems like a straightforward fix, but I am afraid I will damage something critical. This is exactly what I plan to do:

1. Check that the transmission is in neutral and pull the parking break and chock the tires.
2. Disconnect the battery and pull the distributor, removing the ignition coil. Remove the rotor from the signal rotor.
3. Remove the cable for spark plug #1 and place a wooden dowel into the hole to make sure the piston is up when I go to TDC.
4. Use a breaker bar to turn the crankshaft pulley clockwise until the TDC mark lines up with the timing mark on the pulley, and the intake and exhaust pulleys are lined up on their respective marks behind the cover.
5. Turn the distributor so that the signal rotor points to the pickup coil and reinstall the rotor, then reinstall the distributor itself, tightening the bolt lightly.
6. Reinstall ignition coil on the distributor.
7. Reinstall the #1 spark and reconnect all the wires.
8. Check if car starts.
9. Shut off car and disconnect the battery, then reconnect it after shorting the T and E1 terminals on the check connector near the igniter with a piece of electric wire.
10. Check for "timing mode" indicator on the dash and use a timing light on the camshaft pulley and advance and retard slowly as necessary to make sure the timing is 10 degrees beyond TDC.
11. Turn off the car. Tighten distributor bolt. Disconnect the battery. Disconnect the short. Reconnect Battery. Enjoy functional car.

As I said, it seems straightforward, but some of the images don't provide much detail. I have some further questions:

1. All the belts are to remain in place, correct?
2. Is the bolt on the original 5mge 19mm? Do I turn it clockwise (facing the engine) with a regular socket?
3. How much force is required with an 18 inch breaker bar to turn if only the first sparkplug is removed? Also, how is it that turning the engine does not over-tighten the bolt? Does it bottom out?
4. I don't understand what I am supposed to see in image IG0021 in the manual, where it talks about the journal match holes. When looking in, I see a half-obscured metallic ring-like structure inside the oil fill hole. Is it supposed to be totally visible?
5. It was a my belief that that rotor sitting on the signal rotor was supposed to be pointing to the #1 coil on the ignition coil housing. The rotor only seems to go on one way, so will it point to #1 if inserted when the signal coil is pointing to the pickup coil? Also, there appear to be two pickup coils. Do I align with the coil on the far opposite side of where the wires leave the inside of the distributor or the coil closer to where the wires leave?
6. Which matchmarks am I to align on the distributor? Is there supposed to be a notch that is supposed to line up with the circles on the distributor's gear?
7. There appear to be three or four connectors near the igniter. Which is the service connector? Is it the one with the rubber cover on it?
8. Is a 3/8 drive sufficient to turn the engine, or will it snap off?
9. Is an Innova 3551 sufficient? I just want a basic light for the job.

Sorry if this is a lot. I didn't find this specific information anywhere, and I don't want to damage the engine by accident.

Joined Mar 13, 2003
·
8,397 Posts
1. Yes
2. Its regular thread so righty tighty lefty loosey
3. A fair amount. YOu should remove all 6 otherwise turning it won't be smooth.
4. When the engine is at #1 cylinder TDC compression there is a hole in the camshaft that lines up with the hole in the housing
6. There is a groove on the distributor housing that lines up with the dot on the distributor gear
8. With all the plugs probably OK, but I would recommend an 1/2 breaker bar

You're way over thinking this. Rotate the engine so the crank pulley is aligned on zero and check the two camshaft marking to see if they are lined up. If they are pointed the opposite way turn the engine over a full turn so they all line up. When you take the distributor cap the rotor should be pointed near the 1 terminal. When you slide the distributor out the dot on the housing to gear should line up. When you stick it back in dot on the gear should line up before you stick the distributor in. As you engage the gear the rotor will turn.
R

Joined Mar 13, 2003
·
8,397 Posts
You always turn the engine clockwise. Its the same direction it rotates when the engine is running. You don't over tighten the bolt more since its torqued to like 160 ft-lbs and it only takes like 5 to rotate the engine. I mean you can turn it over with a 3/8 ratchet if all the plugs are out.
R

Joined 2 mo ago
·
10 Posts
That's what I figured, thanks. Two more things before I get the parts:

1. The socket size for the camshaft pulley bolt to be turned is 19mm? I couldn't fit my gauge down easily and got between 19 and 20mm.
2. I have a really long extended 5/8 deep spark plug socket that I used for another car. Is this the same size for the spark plugs on the Mark II's 5mge?

Joined Apr 10, 2003
·
2,101 Posts
if you loosen the crankshaft pully bolt (19mm iirc) by turning the engine (slowly) counter clockwise (even with all the plugs in) than the bolt wasn't tight enough to begin with.

RedComet said:
That's what I figured, thanks. Two more things before I get the parts:

1. The socket size for the camshaft pulley bolt to be turned is 19mm? I couldn't fit my gauge down easily and got between 19 and 20mm.
2. I have a really long extended 5/8 deep spark plug socket that I used for another car. Is this the same size for the spark plugs on the Mark II's 5mge?
Click to expand...

Find TDC by removing oil filler cap, and looking inside for the little hole (around 1/4"-5/16" diameter. That hole is always there, and you can see the cam underneath it. When you rotate the engine to TDC, you'll see a hole in the camshaft underneath align with the hole you always see.

Once you've found TDC, the little notch on the crank pulley should be pointing at the 0 mark on the lower timing cover.

Turn the engine to 10 degrees as indicated on the timing cover.

Put your distributor cap on, and use a Sharpie or something to mark on the actual distributor where the #1 plug wire is.

Remove the cap, and insert the distributor so that the rotor faces that #1 mark you just made once inserted (it rotates as the gears mesh, you might have a time or two of trial and error) while the distributor adjustment bolt is in the middle of its range.
R

Speedrye said:
Turn the engine to 10 degrees as indicated on the timing cover.
Click to expand...

This is actually a clever way of dealing with the issue, but wouldn't a timing light allow for a more precise adjustment? Also, where is the rotor supposed to be pointing when the engine is at TDC? I thought that it was supposed to be at #1 at TDC.

Joined Apr 17, 2019
·
146 Posts
You'll still want to use a timing light on it since the distributor has a decent bit of adjustment, but this gets you to the correct distributor alignment much more easily.
R

Joined Oct 31, 2003
·
7,168 Posts
Yes, the 2 blade Yelliw connector!
T = Yellow/Black stripe
E1=Brown
At TDC, the rotor is about the #1 wire, or even a bit after.
The spec being 10deg before, (5 at the intake cam) then probably tooked that into account when aligning things up.
Yes a timing light is better to do it right.
Use when engine warm.
R

Out of curiosity, what are the other two for? I heard that the single wire connector is for the O2 diagnostics.

Joined 2 mo ago
·
10 Posts
Thank you for providing a searchable version of the manual. It will help considerably. However, your EWD link appears to be nonfunctional.

Joined Oct 31, 2003
·
7,168 Posts
I just read in an Admin post that we can have only one link in our Signature with the new forum.
Sent you the link via a private email. Here it is also. 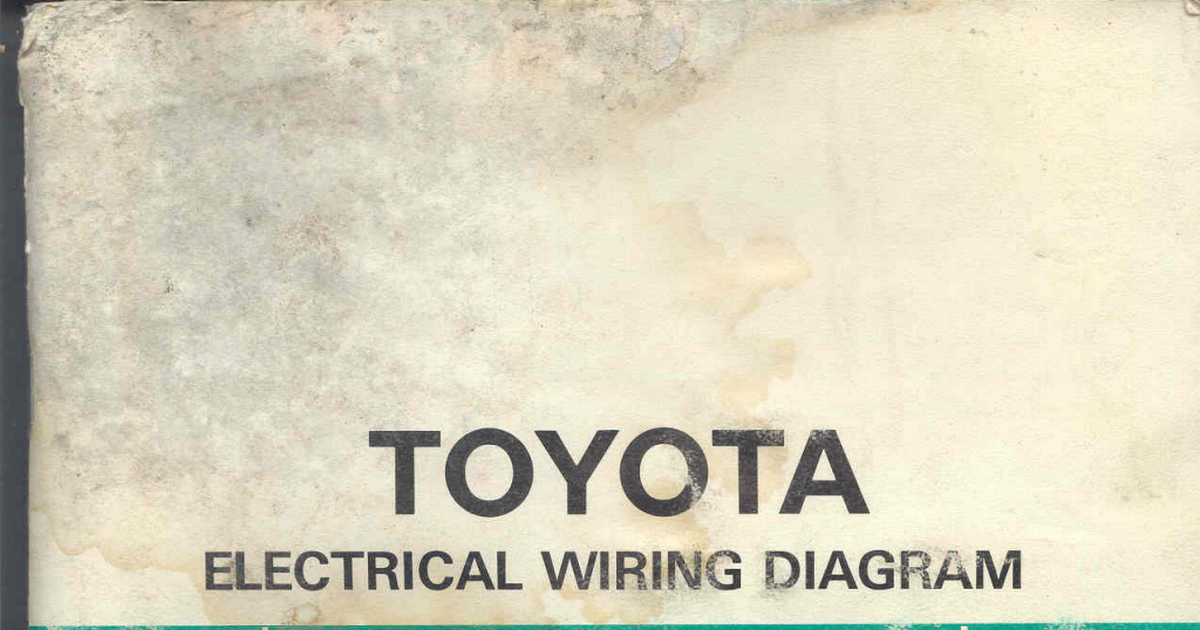