Joined Jun 21, 2013
·
1,355 Posts
Another successful test day at Barber in Alabama led to some more updating. I made a bad choice going to 15" wheels so I bought some cheap 17s and they were SO much better at Barber.

Fuel system work to get every drop of fuel from the tank, a modified gas pedal to change the throw ratio (the Honda Throttle body pulley is much smaller than OE), a new 3" exhaust that runs out the back of the car, and finally repainting the driver side to match the updated IMSA theme. Many days and nights later she's just about ready for 14-hours at Road Atlanta this weekend.

Joined 12 mo ago
·
38 Posts
Just found this thread and read every damned post in it. high fives to Revvhappy

Even if it's a stanky beat up old Toyonda now, I love your car and all the blood, sweat, and tears you have put into it. Well done, sir. Well done. Thanks for sharing everything with the rest of us.

I don't see myself going quite so far in terms of modification with my $600 '85 Celica GTS, but I'm sure stoked to get behind the wheel when it's running.

Joined Jun 21, 2013
·
1,355 Posts
Thanks for the feedback, Grim. I've found so much good information on this site and want to add to the expertise in whatever way I can.

It was an interesting weekend. Friday was a test day and I had to spend the morning clearing up some safety issues that came up in tech the previous evening (new rules and tighter inspections). After lunch my first driver went out and turned laps for 25 minutes as I collected data on fuel consumption.

The second driver (fast guy and first time driver for my team) was watching the AFR gauge and came in after 2 laps saying it was reading very lean at full throttle. We spent the rest of the afternoon chasing a ghost - replacing sensors and a fuel pump. Finally at 5pm when practice ended I mentioned the new 3" exhaust, which I didn't believe could make a big difference... well, it did! Fortunately my tuner works 15 minutes from the track and offered to drop by to look at datalogs. He ended up adding 15% more fuel to the table! I learn something new every day, but we lost the chance to truly test the fuel system. A test drive on the track access roads showed good AFRs, so I was less worried about racing the next day.

The forecast for race day had been 50 degrees and dry all week - until the night before the race when the forecast changed to 2-4" of snow! We arrived at the track early to prep and it was cold but there was no precipitation. The race started and we worked our way into the top 10. About an hour into the race the driver mentions that the low-fuel lights are on, then the engine stumbled and he dove into the pits. I was expecting the car to run at least 90 minutes so we weren't ready to fuel or change driver. Somehow we managed to get our gear on, fuel the car, and buckle in a new driver in less than 5 minutes (the minimum pit time limit).

So now we had to change our race strategy from 6 stops to 13 (losing 5 minutes of track time with each extra stop). Halfway through the 2nd hour the snow started. 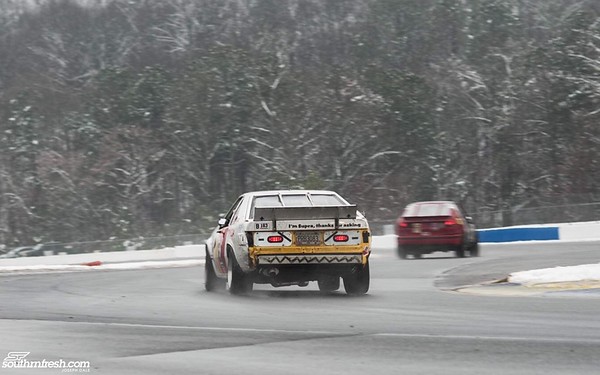 We had the most amazing luck catching full-course yellow flags to fuel the car while everyone else was going slowly behind a pace car. Then the snow got so bad that they stopped the race at 11am. The cars came to pit lane and we covered them. 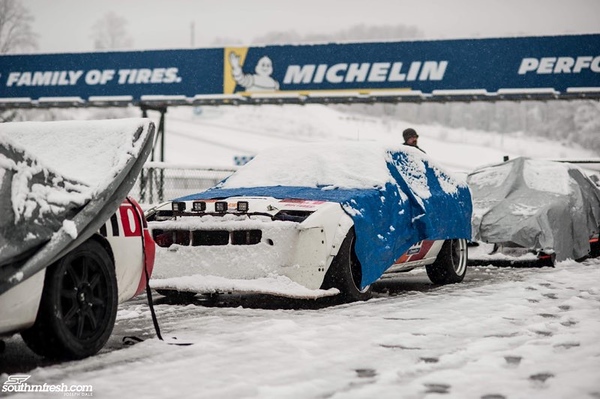 The snow wasn't supposed to let up for a couple of hours so we got some lunch and stayed warm in an enclosed trailer. Around 2pm the snow stopped and we were told that the race would start again at 3pm.

We kept turning laps and coming in for fuel whenever the lights came on. The track conditions didn't change much - cold and wet the entire time. 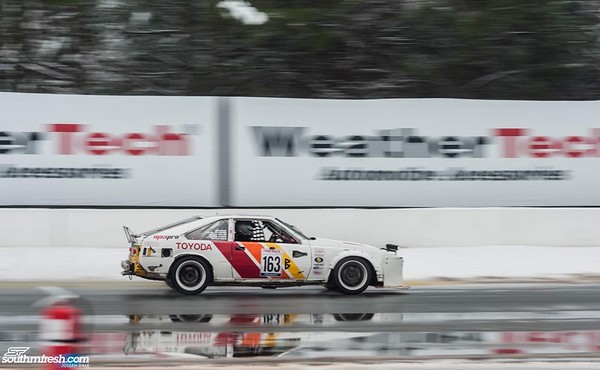 When darkness fell (we were scheduled to go until 10pm) the fog rolled in. I finally got a chance to get in the driver's seat at 7pm in the dark and fog. I spent most of an hour in the car in a line behind a pace car because cars kept crashing and flying off the track. I think I eventually got 5 laps at speed and it was scary - the fog made it impossible to see landmarks, corner stations, flags... anything at all. They finally made a decision to stop the race at 8pm.

The car drove onto the trailer and we finished 8th overall out of 80 cars. That's a win. Without the fuel problem we may have contended for the win.

An opportunity came up today to race at the same track next weekend. Another week of thrashing starts tomorrow.

Grimbrand said:
Just found this thread and read every damned post in it. high fives to Revvhappy

Even if it's a stanky beat up old Toyonda now, I love your car and all the blood, sweat, and tears you have put into it. Well done, sir. Well done. Thanks for sharing everything with the rest of us.

I don't see myself going quite so far in terms of modification with my $600 '85 Celica GTS, but I'm sure stoked to get behind the wheel when it's running.
Click to expand...

There are a couple of 85 Celicas that race in the same series - one has a 2JZ! It will be a rocket when it gets dialed in.

Joined Mar 14, 2003
·
10,594 Posts
Wow, snow on race day, surprised they didn't just cancel the whole thing. Endurance racing is nuts. If it starts to do anything more then sprinkle after my first run at an autox event, I pack my shit and head home lol.

So what's the fuel issue? Seems pretty steep to just be from the map change. But yeah, all exhaust diameter, and even primary header length changes, can affect your tuning. I've run several different headers on my 6m and I have to aggressively retune every time (though my setup is very finicky and sensitive).

Joined Jun 21, 2013
·
1,355 Posts
After the race this upcoming weekend I'm going to install the header I made from an S2000 OE unit. Long tube primaries and larger tubes will probably necessitate more fuel.

I have no idea what the fuel pickup problem is. We are only able to use 9 gallons before the surge tank goes dry. That means we're not getting 8 more gallons. We theorized that there might be an air leak near the internal pump, and once the fuel level drops below the leak it just sucks air. I took the internal pump out Sunday and didn't see any obvious problem. Today I installed an external lift pump to fill the surge tank (and removed the internal one. Friday is qualifying from 1-5 pm and I'm going to use it as a test session to collect data.

Joined 12 mo ago
·
38 Posts
I keep thinking of good solutions for you, and then kicking myself when I realize you're running ultimate low-buck stuff. Forget the Hydra-mat! lol

Joined Jun 21, 2013
·
1,355 Posts
I actually installed a hydramat before the race with an internal fuel pump. I think the pump is the culprit (it had been in the tank since before the engine swap) so I removed the internal and installed another Walbro external as a lift pump to my surge tank.

A lack of oil pressure kept us from qualifying Friday. Fortunately I noticed this in the pits at idle. We spent the afternoon dropping the front suspension and oil pan to find that the oil pickup pipe that I welded together broke just above the pickup. Mike welded the pipe back together and we gooped up the oil pan - unfortunately it was difficult to get the surface of the block clean before installation and we ended up with an oil leak Saturday morning.

The good news was that we got 40+ laps in before the leak got too bad to continue. The car turned a 1:42.9 with me driving - more than 4 seconds faster than I've ever been around RA. That lap is somewhere in the following video. I can't wait to see what a good driver can do with it.

Damage from a shunt in T1 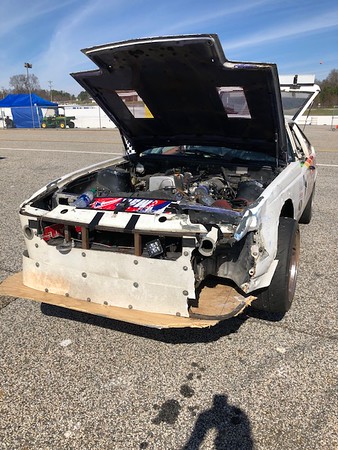 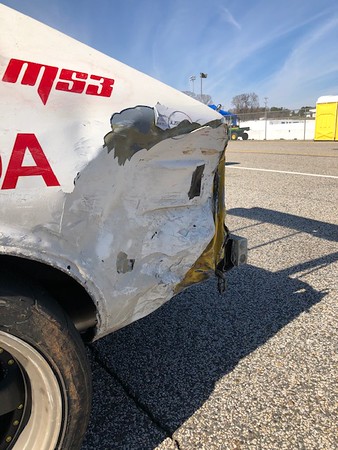 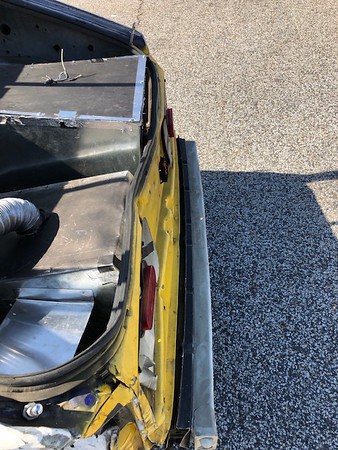 Joined 12 mo ago
·
38 Posts
Poor Grumpybutt! Kudos on finding your speed though. =)

Joined Jun 21, 2013
·
1,355 Posts
Plans have begun for Grumpy 2.0
I talked to my cage guy today ? This weekend I'll be stripping the spare chassis in the driveway. This one will get a fuel cell and some other upgrades.

I'm going to straighten the current chassis out as well as possible, and I found a solution to my oil pan woes. Photos soon. That's the only thing keeping the car from being on track again.

Joined Mar 14, 2003
·
10,594 Posts
Ouch, fixing this chassis and making a new one? I suppose eventually you will have accumulated too much damage to bother, but kinda seems like what you have isn't too bad to fix. The front end was designed to be easy to repair right? That quarter sucks for sure, but a hammer will put it mostly back in place and the rear end damage looks minimal. Its just kinda mind blowing how much prep work a chassis can take.

I did find a kink in the left frame rail in front of the crossmember today. It doesn't affect the alignment, but will affect the position of the front air dam. 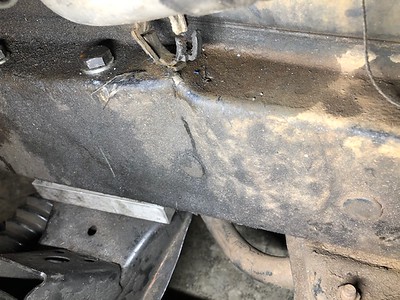 And I'll have to solve a couple of issues to get the engine in with the new oil pan. It will have to shift forward about 2.5", which moves the shifter and transmission mount. I believe that I can just extend my current motor mounts since they are overkill (1/4" steel). The good news is that I'll have a little more room to work between the head and firewall.

Fun story - last time I was on Road Atlanta was in a bone-stock Jaguar XJS. The body roll capacity of that car is indescribable...

Joined Jun 21, 2013
·
1,355 Posts
The Honda engine sounds pretty nice to me also, but the 5M had a beautiful tone and was different than anything else on track.

I'll bet that Road Atlanta is scary in a car with excessive body roll. Did you scrape the mirror in Turn 1 ?

Just go fast and fun,Peter.
You are driving a RACE CAR!

revvhappy said:
The Honda engine sounds pretty nice to me also, but the 5M had a beautiful tone and was different than anything else on track.

I'll bet that Road Atlanta is scary in a car with excessive body roll. Did you scrape the mirror in Turn 1 ?
Click to expand...

Made the mistake of following a good line and clipping the inner curbing, which just rolled the car that much more...

...some poo nearly shot out.